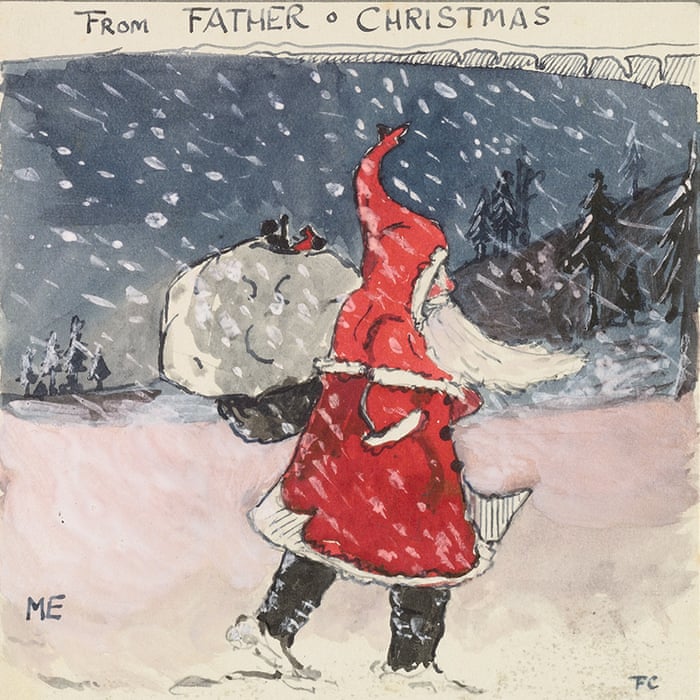 J.R.R. Tolkien is, of course, best known for his fantasy masterpieces The Hobbit and The Lord of the Rings but the Professor was also a devoted family man who created many whimsical pieces solely to entertain his children, and not originally meant for general publication. Among these are the Letters from Father Christmas. Beginning in 1920 good old Father Christmas (better known to us Americans as Santa Claus) wrote an annual letter to Tolkien’s eldest son John. The colorful — and often hilarious — notes continued to arrive every year at Yuletide until 1943, lasting through the childhoods of John and his siblings Michael, Christopher, and Priscilla. The letters were written in Father Christmas’s spidery penmanship, and often included sarcastic asides from St. Nick’s two cheeky assistants, the Great Polar Bear and Ilbereth the Elf. The notes were also usually accompanied by gorgeous color illustrations, courtesy of Father Christmas himself, depicting the madcap life up at the North Pole.

To mark the one hundredth anniversary of the first letter, the entire collection has been republished as a gorgeous hardback edition. All of the letters, envelopes, and artwork are reproduced in glorious color.

I’ll be gifting this copy to my three little cousins, in the hope that reading these delightful letters becomes a Christmas tradition for them. But before wrapping the book I read it in full so that I could review it for you here.

When I said that this hardcover centenary edition was gorgeous, I meant it. The first thing you see upon opening the book is a beautiful collage of the various letters, envelopes and drawings.

These images are reproduced throughout the book, accompanying and providing context for the corresponding text. This book is worth the asking price for the artwork alone.

I will say that the Letters from Father Christmas are not really meant to be read one after the other in quick succession. Although it was not ideal, I devoured the book over a couple of days so that I could get this review out in time for Christmas. For an optimal reading experience, I would recommend that you pace yourself, perhaps reading only one or two of the letters at a time. Don’t rush through the book like I did. They are also clearly intended to be read aloud, so if you have any small children in your family don’t hesitate to include them in your read-through. They’ll love it!

Fans of Tolkien’s larger body of work will find a lot to enjoy in the letters and will likely spot several little nods (whether intentional or not, I’m not sure) to the Middle-earth legendarium. Hardcore fans of The Lord of the Rings will be certain to note the similarity Ilbereth’s name bears to Elbereth, a title given by the Elves of Middle-earth to the angelic being Varda, the Queen of the Stars.

Being a philologist, Tolkien couldn’t help but create a couple of languages for his version of the North Pole, including “Arktik” (an alphabet and language that reminds me a bit of one of the Professor’s Elvish tongues) and a goblin alphabet!

Tolkien’s North Pole is not for the faint of heart! Besides the constant over-the-top pranks and “accidents” of Polar Bear and his nephews, the goblins are a constant menace. Remember that in Tolkien’s fantasy, “goblins” is simply an alternate term for his fearsome Orcs! The encounters with the goblins build over the course of the letters to a climactic battle in which the evil creatures lay siege to Father Christmas’s home in 1941 but are finally driven off. Surprisingly, Polar Bear becomes a genuine hero in the battle, bringing to mind the fearsome shapechanger Beorn in the Battle of Five Armies as recounted in The Hobbit. I don’t think it’s a coincidence that the ongoing conflict with the goblins at the North Pole intensifies just as the Second World War consumes Europe and the rest of the globe.

If done right, I’m convinced that the Letters from Father Christmas could be adapted into a delightful and funny animated movie that would become an instant Christmas classic. Though given how protective the Tolkien estate is over the Professor’s work, that is not likely to happen any time soon.

In the meantime, this Centenary Edition of the Father Christmas letters will make a perfect holiday gift for any Tolkien fan. It’s also a great way to introduce the younger generations to Tolkien’s work. Yearly readings of the letters during Advent could make a lovely holiday tradition for any family.

Merry Christmas and Happy Holidays to all my readers! I’ll close by sharing a timely quote from the Professor himself, which can be found in the front of the book: